South Florida’s entangled gun environment began right here more than 500 years ago. So too America’s gun culture. Remedies are evolving here too.
So Flo Guns (SoFloGuns.com) is the new feature documentary from TheoEco about guns in South Florida past, present, and the future. From Ponce De Leon’s arrival on Key Biscayne in 1513, to pirates in the Keys, throughout the 17th and 18th centuries, to Seminoles and Soldiers in the 1800s, to gangsters in the early 1900s, to the Cocaine Cowboys, to Parkland, we have a long and tangled relationship with guns, and their evolving lethalness.

Guns and South Florida go together like palm trees, sand, and art deco hotels. They’ve been here since before anyone can remember and are more numerous than people. It’s clear they are not going anywhere and are also a scourge on its citizens. We love them, and we hate them, and our politics can seem twisted by them with South Florida (So Flo) especially stained by them in the national psyche.  In our film, the guns themselves–and their evolution– are the main characters and lay the ground for the documentary’s narrative trajectory toward hopeful outcomes requiring all sides to work together.

TheoEco’s goal is to have hundreds of thousands of South Floridians, and millions more worldwide see the film by the end of 2023. Clearly, we need a lot of repeated screenings to all corners of South Florida - a role community organizations can uniquely provide for their neighbors in addition to the awesome local cinemas throughout our area. They have screens and venues that can be put to good use in off hours, while also offering fundraising opportunities and the chance to increase the flow of visitors and regulars alike.

​But first we have to make it! Our co-hosts can get on board now and be a part of it from the very beginning. Which is what these fundraisers are all about. We have a budget of just over $200,000 and have spent a little more than $60,000 so far. We are reaching out to foundations for grants, wealthy donors for donations, crowdfunding campaigns, social media, etc. 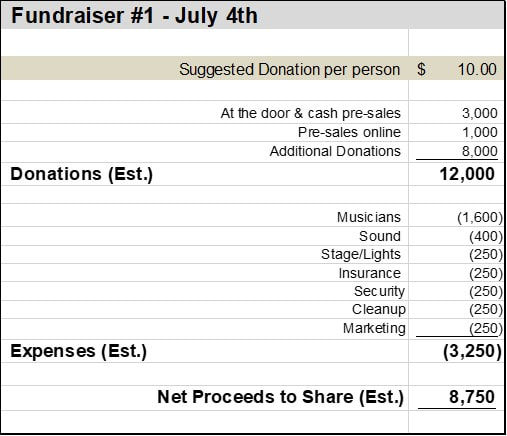 Since TheoEco started we have hosted screenings and fundraisers for our projects and causes at churches, schools, and community centers all over South Florida.

For an example of prior fundraisers go to So Flo Floods Bahamian Relief Screening 09/27/2019 (theoeco.org)

TheoEco’s fundraisers are also engaging events. Various size and configurations can be had, ranging from the small private event to gala events with staged performances by musicians featured in the film like AJ Niilo and Dorian Reyes. This is very much a South Florida project with the film’s producers, musicians, film crews, shoots, and guns all based here. It should be funded here as well, as much as possible.

The basic arrangement is TheoEco brings the show, and the cohost brings the venue and promotion.

​Net fundraising revenues after expenses are shared equally between TheoEco and the co-hosts. Flipcause non-profit fundraising tools keep it all straight and allow for peer-to-peer campaigns that are easy and powerful in harnessing the power of your group to spread the word and keep track of who raises what. We also provide the following to make the fundraisers successful:


​Options
We look forward to holding a screening with your group soon! For more information please contact Steve Richards at 305-310-2634 SteveR@TheoEco.org
About TheoEco

TheoEco documents and brings to light ecological and human rights struggles, while researching the economic and theological entanglements that influence them, particularly in the United States, Nepal, and other regions with celebrate​d environmental importance. TheoEco Institute is a registered 501(c)(3) non-profit organization headquartered in the United States in Miami, Florida. Founded in 2015, TheoEco has focused on situations as varied as earthquake relief in Nepal and sea level rise in South Florida. Much of its resources are focused on the institute’s documentaries and research initiatives.
Support Us