Guns and South Florida go together like palm trees, sand, and art deco hotels. They’ve been here since before anyone can remember and are more numerous than people. It’s clear they are not going anywhere and are also a scourge on its citizens. We love them, and we hate them, and our politics can seem twisted by them with South Florida (So Flo) especially stained by them in the national psyche.  In our film, the guns themselves–and their evolution– are the main characters and lay the ground for the documentary’s narrative trajectory.

We start at the beginning of guns in South Florida on the southwest coast where Ponce De Leon brought the first early guns with him to South Florida near what is now Naples, in 1521 (he was promptly killed by a Calusa Indian’s poison arrow).

We will visit with Dr. Paul George, Miami’s premiere historian at HistoryMiami Museum whose interview will have much to contribute over the course of the film with anticipated looks at some of the museum’s artifacts and photos. We will also return to the Collier County Museum in Naples to see a matchlock musket and fully-garbed musketeer behind glass. Another highlight of this segment will be a planned live-fire demonstration to see how Spanish muskets worked and try to imagine what the earliest Native Americans at the time might have thought with a short animation. 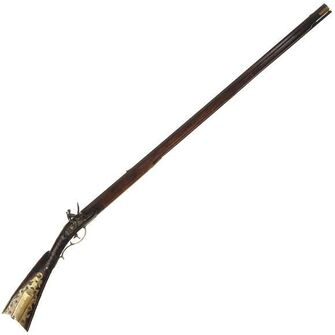 Kentucky Long Rifle
Next stop are the long rifles and muskets around at the writing of the 2nd Amendment in 1789. These muzzleloaders are reminiscent of what Andrew Jackson’s troops would have used in the First Seminole War in 1817. Though South Florida was largely uninhabited at the beginning of this point, the wars were pushing Native Americans south. Commodore Perry planted the American flag in Key West in 1822, and the Keys, and its guns, became part of the USA.

Along the way we document the loading and firing of a long rifle, perhaps the one we buy on our trip to Connecticut at Traditional Firearms in Connecticut, a modern manufacturer of Kentucky Long Rifles. Florida has never been a big manufacturer of the guns it uses. New England was, and still is, a leading producer of So Flo’s guns, and will continue to be.

The next stop is the 1920’s and the advent of automatic weapons on America’s streets with a look at Al Capone. Not that Capone is known for crimes here, though he is thought to have organized the St. Valentine’s Day Massacre–featuring two Thompson submachine guns (Tommy Guns)–from his Palm Island home in 1929.

We’ll also get a look at an actual Tommy Gun and further document the evolution of South Florida’s guns including the assault rifles of today. ​

Gangster violence led to the National Firearms Act in 1934 and regulates what guns citizens can possess. The gun industry is alive and well though, as we see in footage and interviews at a Miami gun show catering to a community of enthusiasts. We bring these folks to the fore so we can understand where they are coming from and find common ground with the gun control crowd.

The need for more gun control is generally agreed upon, even amongst the majority of gun owners; Yet it is exceedingly difficult to enact into law, with the NRA generally blamed for this dichotomy. "Common sense gun control" is what advocates call what they are proposing. But many believe gun control just doesn’t work and that criminals will get guns no matter what. We’ll dig into these arguments, including an interview with a representative of Florida Carry at their Line in the Sand event on South Beach.

CURRENT GUNS AND THEIR IMPACT

For many, the mass killing of students at Marjory Stoneman Douglas High School changed everything. But not long before that was the Pulse nightclub shooting in Orlando, the airport shooting in Fort Lauderdale, the Dadeland Mall shooting in Miami in 1979–the list is long. We’ll check in with Dr. George again as he talks about a “new era” in South Florida’s gun culture as we see the impact of the Cocaine Cowboys and all the money that was flowing into Miami.
Dr. Paul George discussing the Dadeland Shooting and the advent of Cocaine Cowboys.
​But the totality of these shootings compares differently to the steady flow of shootings in Florida’s neighborhoods, especially the poorest. Florida gun laws are infamous for their laxity. "Stand your ground" and Trayvon Martin made Florida even more notorious than ever before. We’ll review all this with Dr. George and others in the community while presenting impactful footage from the Parkland memorials and the March for Our Lives march on Miami Beach. We will also delve into the current state of affairs in Tallahassee as proposed gun legislation never stops. 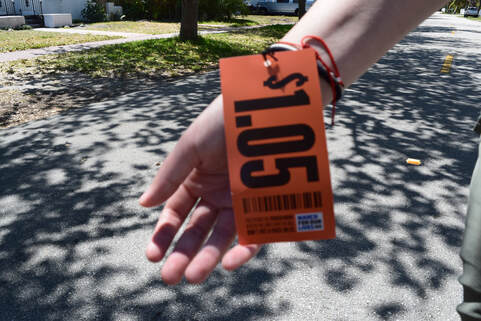 $1.05 Price Tag from March for Our Lives Protests
Support Us