Prefer the pdf version? Click here.
Summary
​​Finding the Spirit in Trek to Bucha.
Part 1 of this essay looked for economic lessons from Trek to Bucha. Part 2 tries to discern the more spiritual elements. The title: Force Majeure, touches upon both in that the legal jargon it represents to the insurance industry also uses prophetic language more akin to a theological inquiry.

​Intriguingly, war is not an act of God like a hurricane or earthquake. War is manmade. Faith is critical to think God is present at all. If so, where and what is He doing, for whom, and for what reason(s).These are difficult questions for humans to grasp, much as we might try.

It’s not something I’ve spoken about aside from conversations with Fr. Yaroslav at Christ the King UCC in Boston. He being a priest means that a conversation about the Spirit’s role – especially in his homeland - comes naturally.

​In Trek to Bucha it’s easy to think the Spirit is guiding the project. Events constantly take me to unanticipated rendezvous. Like in Boston when I see the Phillis Wheatley statue, and take note of the poem carved into the granite:
​This mention of God is the first in the film. The reason I’ve included it is how it touches the human sentiment that influenced the Minutemen in 1775 to fight for their liberty in Boston. It’s the same God given sentiment driving Ukrainians today and why we relate so readily to their cause.
The Ukrainian Catholic Church
Phillis Wheatley was just the beginning of Spirit sightings in the film. ​
Next, I was nudged toward Fr. Yaroslav through a “chance” encounter with REI associate Gene Yee when buying gear for the trek. Next thing I knew I had prayers and a Guardian Angel to accompany me. I saw just how Christian these Ukrainians were as I saw the parish house bustling with parishioners gathering supplies for the front lines.
The Ukrainian Catholic Church was totally new to this Anglican, but the services felt familiar. Most importantly perhaps was Fr. Yaroslav’s telling me about Ukrainian Catholic University in Lviv. He told me to be sure to visit.

UCU holds a big place in the film. Most poignant from a Spirit perspective for me is the quote from student Sasha about how secular Ukrainians might appear. In fact they hold their Christian traditions very close – and is a big part of their power. He also offered that for him the Holy Spirit most closely relates to the feeling of hope.

What we don’t capture in this segment is how much impact UCU had on my plans. The Russians retreated from Kyiv’s suburbs during my time there and a place named Bucha emerged in the news.
Folks Like Us
As I left UCU on my way to Bucha the stories turned less overtly religious and more secular though churches dotted the landscape everywhere.
I interviewed people that talked about their spiritual lives like most Americans would. Most are Christian and might go to church a couple times a year to celebrate Christmas and Easter. But there is a difference. Ask an American what religion they are, and most Christians will identify their denomination: Catholic, Baptist, Lutheran, Methodist, Pentecostal, Episcopalian, etc.

In Ukraine people hardly understand the question. Most are Ukrainian Orthodox, especially after leaving the Western part of the country with its large representation of Ukrainian Catholics.

We see the Orthodox Church in an Easter Service at the Church of St. Andrew, a beautiful church with a now notorious identification since the Russians used its grounds for a mass grave.
​Finding the Spirit in Bucha is hard to square with the atrocities that happened there. Yet, it seems to be everywhere.

We definitely find it in a basement.

​“Ukraine is Peace” is written on the wall of a condo basement that acted as a bomb shelter for some 90 residents in the early days of the war. It was written by children who were playing as the war raged outside. Fr. Yaroslav in his comments after the premiere screening feels that this is the most poignant scene of the film because it shows how Ukrainian children see their own country.
​The rest of the Easter segment we see the humanity in Bucha’s people as we interview Timer, a citizen with firsthand and unfiltered views of what happened there. He was the only individual we interviewed who never evacuated.
Conclusion
​I had originally decided to go to Ukraine to bring attention to the nuclear power plants in the war zones.
Turns out the stories I documented had nothing to do with power plants. But they had everything to do with the Spirit and more than a little faith. Which sort of begs a question I ask myself: “Would you have gone to Ukraine to document Bucha’s aftermath?” Unlikely, if I’m being honest with myself. In the words of Elmore Blues (Dan Akroyd) in The Blues Brothers: “The Lord works in mysterious ways.”
Does Ukraine reflect a war of the Spirit against its metaphysical foes on the other side? Is Russia the “Dark Side” in Star Wars speak. Putin as Darth Vader is obvious, as is the empire (Russia) trying to eliminate the Galactic Republic (Ukraine). Put a lightsaber in President Zelenskyy hands and he makes a pretty convincing Obi-Wan. In Star Wars the republic is outgunned and seemingly doomed. But the “force” is with them, and they prevail. It’s an old story George Lucas picked up from Joseph Campbell and part of why the West is so united in helping them. As we saw in Phillis Wheatley’s poem, we relate to people fighting for their liberty.

​The final segment of the film is the trip back to Poland from Kyiv. This was a tale of three trains including a sleeper train boarded and hour or two after midnight in a blacked-out train station somewhere in the middle of Ukraine. In the lonely waiting room, the TV was turned to an Orthodox service celebrating Easter at midnight. I had the feeling people throughout Ukraine were watching with me.
But the best part was getting on the train in a dark and crowded compartment with what I thought were three others. Soon after we got rolling I heard the fussing of a toddler. In fact, there were five of us in the compartment. I suppose this little refugee really brings home what this war is all about.

When I got back to Boston, I made my way to the Christ the King and talked to Fr. Yaroslav. He was so happy (relieved) to see me – and I him. Since April I reviewed footage with him, and he made great contributions to the footage we used in the film. He and Christ the King UCC also graciously hosted the film’s premiere.

Turns out the Ukrainian Spirit is easy to find. 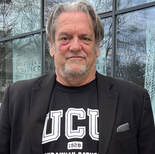 Steve Richards is managing director of TheoEco Institute (TheoEco.org), a non-profit focused on economic and ecological entanglements globally. Since 2015 he has directed five socially conscious guerilla documentaries and writes on related topics. He has a corporate risk transfer background and holds economics and finance degrees from the University of Miami (BBA) and Babson College (MBA), with related post-graduate work at Yale Divinity School. He recently spent a month (March 28th-April 25th) filming “Trek to Bucha” (TrekToBucha.com) where he went from Boston, to Warsaw, to Lviv, to Kyiv, to Bucha, and back. This Epilogue sums up what he came away with in terms of economics and potential action steps in Ukraine.
Want to Watch the Film? Click on the widget below:
Support Us